The claimant succeeded in his challenge to the failure by the London Borough of Brent to recognise him as a “former relevant child” under the Children Act 1989. A former relevant child is entitled to support for vulnerable care leavers including help with accommodation, education and planning the transition to adulthood. The Court found that the local authority held responsibility for the care arrangements for the claimant, it did not follow the required procedures for ceasing care and its assessment of the suitability of the claimant’s accommodation was unreasonable. There is strong criticism of the local authority’s failure to comply with disclosure duties. As a result, the London Borough of Brent is undertaking a review of procedures for ensuring effective and timely disclosure in judicial review cases involving Children and Young People’s Services and Adult Social Care.

Two weeks ago I posted what I thought was the good news that the Legal Aid Agency had reinstated devolved powers for solicitors to grant Emergency Legal Funding Certificates for Judicial Reviews involving homelessness children under the Children Act 1989. It turns out that this was not correct.

I was confident that devolved powers had been reinstated for Children Act cases because a member of staff at the Legal Aid Agency had telephoned me and told me that they had. This was in response to an application which I had made for the Legal Aid Agency to grant an Emergency Legal Funding Certificate. This was for a child who was sleeping on the floor of a living room with a sibling and his mother. They had all been asked to leave but they were not at risk of being put out on the street within the next 48 hours. On these facts I was advised by the caller from the Legal Aid Agency that I would be able to grant an Emergency Legal Funding Certificate myself. I passed this information on through my post. 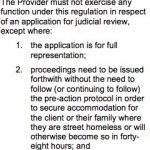 means that in many if not most cases it would not be possible to exercise them. These conditions can be found in the tables of delegated functions published by the Legal Aid Agency. These included  The Civil Legal Aid Procedure Regulations September 2018 which stated that Emergency Legal Funding Certificates could only be granted where the child was street homeless or at risk of street homelessness  within 48 hours. The actual wording is at the bottom of page 8. Here is a screenshot. This condition means that unless the child is on the street already or will be in 48 hours a solicitor cannot grant an Emergency Legal Funding Certificate. This will cause problems where the child is in highly unsuitable accommodation but is not on the street, or as in my case where they have been asked to leave but the person who they are staying with has agreed to allow them to stay with them whilst proceedings are issued.

The HLPA message went on to point out that another table Civil Legal Aid Financial Resources September 2018 stated that devolved powers could only be issued where the client was in receipt of a passported benefit and had savings of less than £2,000.00. As far as I am aware children cannot claim passported benefits which means that according to this rule it will not be possible to for solicitors to grant Emergency Legal Funding Certificates for any children under devolved powers even if they are street homeless or threatened with street homelessness within the next 48 hours. It won't be a problem if the client is the parent and they are receiving a passported benefit. This will of course exclude all adults with no recourse to public funds who will also be unable to claim a passported benefit.

The HLPA message stated that the above issues had been raised with the Legal Aid Agency and that clarification would hopefully be provided soon. I also telephoned the Legal Aid Agency last Wednesday and asked if somebody could ask the person who called me to check the above points and let me know if they would still advise me that I should have used devolved powers. I was able to speak to a senior case worker but not to the person who called me. I was told that I would be contacted with an answer. I had not received one by the end of the week.

I hope that the Legal Aid Agency will correct what I also hope will be recognised as errors in the above tables so that solicitors can exercise devolved powers again in respect of Children Act  Judicial Reviews. In the meantime the risk of not being paid for the work carried out means that it will be wiser for solicitors to ignore my earlier post and not grant Emergency Legal Funding Certificates ourselves but to ask the Legal Aid Agency do to do.

This is unfortunately something that housing lawyers hear a lot from parents who have asked for assistance from the Children's Services Department (aka Social Services) when they have been refused assistance by a Housing Department. A variation of this problem is the social worker advising that they can house the children on their own but not their parents.

Families with children often have to ask social workers for help when they face homelessness. It is easy to fall through the safety net that is supposed to be provided by the Housing Department for homeless persons. A Housing Department will usually refuse to assist a homeless applicant for anything more than a short time where they have been found to be intentionally homeless or if they have refused what is considered to have been an offer of suitable accommodation. Then there are whole swathes of people who are excluded from what is now known as mainstream housing due to their immigration status.

Most people react with understandable horror to the suggestion that the only help available to them in what is already a crisis of facing street homeless is to have their children taken into care. This is especially true when the children are babies. The parents take some persuading that the advice the social worker has given them is  wrong and are very reluctant to return to the Children's Services Department. They find it hard to believe that a social worker would tell them something so unpleasant if it was not true. I have been dealing with parents who have received this advice from staff in many different local authorities  for about 15 years now. None of them have had their children housed on their own or taken into care because a parent is homeless. For those who would like to have details available to reassure such people here are some of the reasons why this advice is wrong.

If anyone can point out any other reasons please add a comment. I am sure there are more.

Where families are given this advice a letter of complaint and/or a letter in accordance with the pre action protocol for Judicial Review proceedings should be sent to the council concerned asking them to confirm that they have provided this incorrect advice or to arrange a proper assessment. In my experience this leads to a quick response from a Children's Services Department manager or the Legal Department stating that the family must have misunderstood what was said and inviting the family to return to the office for a proper assessment.

The new WordPress site is up now. I am slowly adding content....