Here is a very valuable document for anyone who like me regularly issues homelessness appeals in the Central London County Court pursuant to Section 204 of the Housing Act 1996.

For years I have had to worry about ensuring that hard copies of the Court papers were received at the Court within 21 days of the date when the Section 202 Review decision letter was received. That now appears to be a thing of the past. Here is the letter as a PDF. 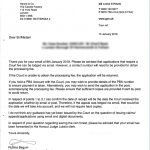 I am extremely grateful to Mrs Begum at the Court for providing a very detailed response to my queries about whether Appellant Notices and supporting documents can be sent to the Court by email as PDFs or whether it is still necessary for hard copies to be sent to the Court. As can be seen from her letter of 15 January, the answer is that they can as long as you have a PBA Account with HM Courts & Tribunal Service for paying the fee.

So far there has only been limited guidance available from the Courts as to what can and can't be issued digitally. Please leave a comment if you are aware of any other guidance. All I had been able to find was the Courts Email Guidance. The attached letter was sent after I had to complain after Central London County Court initially accepted and then sent back an Appeal which I had issued by sending papers by email only. I had been sending Application Notice in this way and having them issued without problems.. My complaint led to the Court agreeing to issue my appeal. As part of the complaint I asked for clarification of the Court's approach.

When I wrote to the Court I referred them to the  Bryan McGuire QC memorial lecture on homelessness given by HHJ Jan Luba QC in April 2017 (Link here) which set out at paragraph 111 a number of very useful Pointers For Appellants. These included a request to cut down on paper work and help save the rain forests. I asked for guidance on those like me who act for appellants might take up the call. I have had a further response from HHJ Luba QC in which he reminds me that Ms Begum as a court official should not be treated as stating what the actual Court procedure is but only as setting her understanding of it. He also suggested that at some point in the future the Courts will be accepting Appeal Bundles in digital format. I think that they should have started doing this some years ago but I am very glad that they are at least allowing us to issue by email.

Since receiving the above letter I have set another appeal to Central London County Court for issue without sending any paper copies. I sent an email to the address: enquiries@centrallondon.countycourt.gsi.gov.uk  which set out the following text:

Dear Sirs
I act for XXX. I attach:-
1. Appellant’s Notice and decision letters under appeal
2. Grounds of Appeal
3. Draft Directions Order
4. Notice of Issue of Emergency Legal Funding Certificate
I also attach a copy of a letter dated 15 January 2018 from Ms Begum at Central London County Court confirming that Homelessness Appeals such as this can be issued by email without the need for hard copy documents to be sent.
Please can you deduct the £140.00 from our account the reference number is PBA 0087335
Please can you issue the Appeal and place the papers before a Judge so that consideration can be made to issuing directions for the preparation of the case for hearing. Please can you send me notice of issue, hearing date and the directions Order or advise as to any reason why you are unable to do so.
Please do not hesitate to telephone me should you wish to discuss the above.
I thank you for your assistance and look forward to hearing from you.
Apart form an automatic acknowledgement email I have not heard back from the Court yet. I will update this post once I do.
Lastly, I have found that the Court of Appeal has a similar but not identical procedure for accepting papers for issue by email. They will accept email filing ( to the address: civilappeals.registry@hmcts.gsi.gov.uk ) but expect you to undertake to file the hard copies within 7 days. Failure to send the hard copies will lead to the appeal being rejected. My understanding though is that as long as the hard copies are received within 7 days the appeal will be treated as having been filed when the documents attached to the email were received
DISCLAIMER
I should point out that I cannot guarantee that the Court will not reject future appeals. I am not stating that the current procedure is but only what my understanding of that procedure is. To avoid rejections I suggest that anyone trying to issue an appeal in this way sends a copy of the attached letter from Ms Begum with the email so that the person receiving it is aware of the contents. I attach a copy in PDF format for downloading. Digital Appeal Letter